Heading up your pet’s healthcare family are our veterinarians. Our vets have over 100 years of combined experience, and hold memberships in multiple veterinary and public health organizations. While each brings a unique set of interests, experience and expertise, all share a deep care for our clients and patients and their wellbeing. Working alongside our veterinarians is a caring healthcare team of certified veterinary technicians, assistants, customer service and administrators. This wonderful, talented group work with our clients and patients and behind the scenes, caring for patients, assisting veterinarians with appointments and procedures, educating pet parents and providing quality customer service.

Dr. Wetherill is the proud founder and owner of Como Park Animal Hospital. He grew up in St. Paul, near Como Park, and remains deeply committed to the Como neighborhood, St. Paul and the Twin Cities Metro. He received undergraduate B.A. degrees in Psychology and Biology from Macalester College in St. Paul, and went on to receive his Veterinary Doctorate from the University of Minnesota in 1980.

After working as an associate veterinarian at several veterinary hospitals in the Twin Cities metro, including Cedar Pet Clinic under the leadership of Dr. John Baillie, Dr. Wetherill decided to open his own practice in 1992. He has held leadership and supporting roles in many community, educational and veterinary groups throughout the years. Dr. Wetherill is now proud to have provided his clients and staff with a beautiful state-of-the-art facility located just 2 miles north of Como Park Animal Hospital’s previous home of 39 years.

Dr. Wetherill’s special interests include avian medicine, surgery, education and advancing veterinary medicine through new techniques and technologies. When he isn’t at Como Park Animal Hospital, his hobbies include fishing, boating, building construction and repairs, and many opportunities to help others. 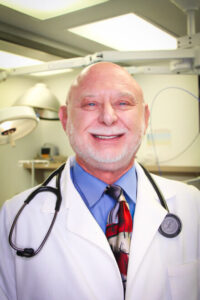 Dr. Jennrich is a Twin Cities native who grew up taking his pets to see Dr. Wetherill at Como Park Animal Hospital. Before pursuing a veterinary degree, he worked as a veterinary assistant for Dr. Wetherill for several years. He received his undergraduate B.S. degree in Biology with a chemistry minor from St. John’s University (‘88) and went to receive his Veterinary Doctorate from the University of Minnesota in 1992. He completed his Veterinary Internship as a rotating small animal intern at Atlantic Veterinarian College, University of Prince Edward Island before returning to Como Park Animal Hospital as an Associate Veterinarian in 1993. He is now the Primary Care Medical Director for the hospital.

When he isn’t taking care of his patients and clients, Dr. Jennrich enjoys time with his wife, Patty, their 2 children – Victoria and Michael – his Golden Retrievers, Samantha and Callie, and his three cats: Walter, Stanley, and Frank. His hobbies include anything and everything to do with the outdoors such as walking his dogs, biking, fishing, and camping. He is also a clinic-awarded BBQ Master with his home smoker and enjoys cooking for his family and the clinic staff! 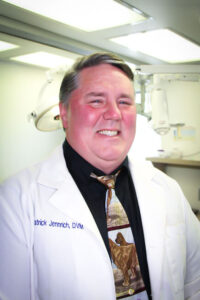 Dr. Chris Casey is a Twin Cities native. He became a part of the Como Park Animal Hospital family as a veterinary assistant in 1989 before he became a veterinarian. He received his undergraduate B.S. degree in Biology from the University of Minnesota (‘89), and his Veterinary Doctorate also from the University of Minnesota in 1995. After practicing in Lockport, Illinois for three years, Dr. Casey returned to the Twin Cities to work at Como Park Animal Hospital as an associate veterinarian.

When he isn’t at Como Park Animal Hospital, Dr. Casey enjoys spending time with three children and wife Christa (who is also a veterinarian). His family also includes a Springer Spaniel, a parakeet, two cats, a goldfish from the local fair, and other pets as they come and go. A true family man, Dr. Casey spends much of his time helping his kids get to their numerous sports and activities. His personal hobbies include quality time running, playing hockey, canoeing in the Boundary Waters, reading good books, and playing board games with family and friends. 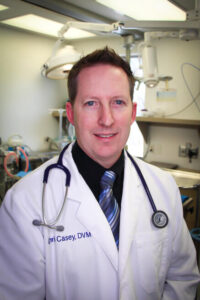 When she isn’t at Como Park Animal Hospital, she loves spending quality time with family in the great outdoors including, but not limited to: paddle boarding, hiking, camping, reading, and going to the beach. Dr. Guzik and her husband, Kris (who is also a veterinarian), have three beautiful children – Liam, Paisley, and Piper, three dogs – Blue, Groot, and Gordie, two turtles – Mikey and Leo, and one cat named Phoebe. 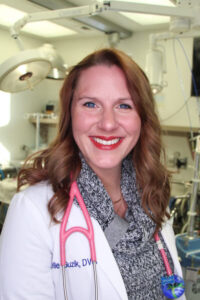 Dr. Sweeney grew up in St. Paul and attended Central High School. He joined Como Park Animal Hospital in 2009 when he worked as a veterinary assistant between his graduate school studies and veterinary school. He left us for a short while to pursue his Veterinary Doctorate in Illinois, and returned in 2014 to make St. Paul, and Como Park Animal Hospital, his home. He has a B.S. degree in Animal Science, a Masters degree in Geology, a Masters in Public Health and received his Veterinary Doctorate from University Illinois at Champaign-Urbana in 2014.

Dr. Sweeney’s special interests include primary care medicine, disease prevention, public health, and surgery. He also enjoys the opportunity of working with a variety of species.

When he isn’t at Como Park Animal Hospital, he enjoys spending time with his wife Jessie who is from North St. Paul and their two kids, Brenden and Annika. His hobbies include hiking, biking, camping, canoeing, board and card games, reading history and science fiction, enjoying craft beers, and exploring parks with his kids. 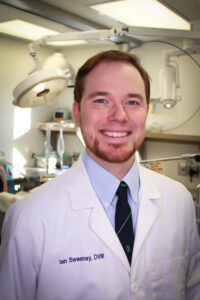 Dr. Todd has been with Como Park Animal Hospital Urgent Care since 2012 and is our current Emergency Medical Director. She has been practicing emergency veterinary medicine in Michigan and the Twin Cities for over 20 years. She received her Veterinary Doctorate from Iowa State University in 1991. She is an active member of VECCS, AAV, AMVA and MVMA.

Dr. Todd’s special interests include emergency surgery and internal medicine. When she isn’t saving pet lives, she enjoys spending time with her husband, daughter and her pet family including a variety of dogs, one cat and an Amazon parrot named Mozart. She enjoys
the sport of flyball with her dogs and has been competing since 1992. Her other hobbies include gardening, any fitness class and relaxing on a beach by the ocean. 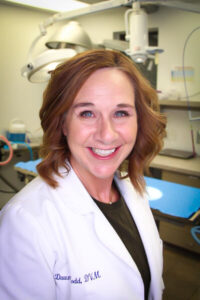 Dr. Torfin has been with Como Park Animal Hospital Urgent Care since 2012. Prior to that she practiced emergency medicine for over 10 years in the Twin Cities. We were lucky to meet her for the first time when she chose Como Park Animal Hospital as a site for an in-clinic veterinary preceptorship during vet school. She received her Veterinary Doctorate from the University of Minnesota in 2002. Following graduation, she chose to continue her education with an option 1 year internship in Emergency
and Critical Care. She is an active member of VECCS, AMVA and MVMA.

Dr. Torfin’s special interests include wound management and critical care. When she isn’t saving pet lives, she enjoys spending time with her husband and their dogs, reading, and traveling. She’s climbed Mt. Kilimanjaro! 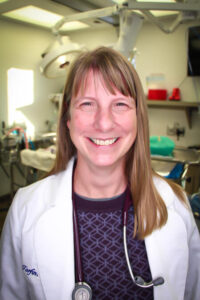 Dr. Pereira has lived far and wide between growing up in Michigan, attending vet school in the West Indies, and spending some time on the east in New Hampshire and Boston before making her way to Minnesota in 2016. Prior to joining our team at Como Park Animal Hospital full-time in 2017, Dr. Pereira provided emergency relief work at other clinics in the area. Dr. Pereira received her bachelor degree from Michigan State University and completed her veterinary education at St. George’s University in Grenada, West Indies in 2014. After completing her clinical year at the University of Minnesota, she went on to pursue an internship in a mixed animal medicine at Myhre Equine Clinic in Rochester, NH (2014-2015) and completed a small animal emergency and critical care internship at Massachusetts Veterinary Referral Hospital in Woburn, MA (2015-2016).

Dr. Periera’s special medical interests include emergency medicine, critical care, and wound management. When Dr. Pereira isn’t saving pet lives at Como Park Animal Hospital &amp; Urgent Care, she is hiking with her husband (who is also a veterinarian), their son, Oliver, and their Corgi, Quinn. They also have an orange tabby cat, Tigre, who does not enjoy hiking! Dr. Periera additionally enjoys spending time with her retired horse and her riding/driving horse. 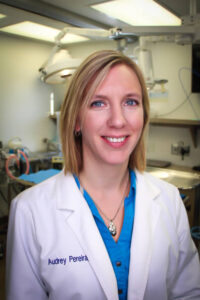 Dr Jacinda Christie grew up in the Seattle, Washington area where she received her B.S. in Biology from the University of Washington. Dr. Christie made the move to Minnesota over 20 years ago to attend the University of Minnesota for her veterinary education which included a rotating internship. She has practiced ER medicine in the Twin Cities since 2005 and joined our emergency and urgent care service in 2019.

In her free time, Dr. Christie enjoys spending time with her husband, daughter, and two cats. Her hobbies include watching her daughter play basketball, play games, watch sports, and to cook. 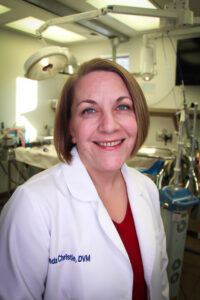 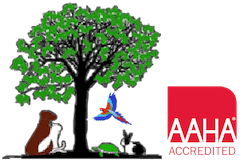 At the intersection of Dale St. & Larpenteur Ave.
